On the field, the San Diego Chargers and Oakland Raiders have had as bitter a rivalry as any in the NFL but in a sense, they’re now partners.

The teams will officially announce Friday that, while they work on stadium deals in their current cities, they will jointly pursue a shared, $1.7-billion NFL stadium in Carson as an alternative…

The Chargers and Raiders will continue to seek public subsidies for new stadiums in their home markets, but they are developing a detailed proposal for a privately financed Los Angeles venue in the event they can’t get deals done in San Diego and Oakland by the end of this year, according to the teams.

In a statement given to The Times on Thursday, the Chargers and Raiders said: “We are pursuing this stadium option in Carson for one straightforward reason: If we cannot find a permanent solution in our home markets, we have no alternative but to preserve other options to guarantee the future economic viability of our franchises.”

There are two possibilities here: Either this is the biggest NFL stadium news in the history of ever, or Chargers owner Dean Spanos and Raiders owner Mark Davis just issued a mindbendingly huge bluff. Let’s examine each of the possibilities:

There is one other likely reason for Spanos and Davis to announce this now, whether bluff or for real: What with St. Louis Rams owner Stan Kroenke announcing his own maybe-a-bluff-maybe-not stadium in Inglewood last month, and the NFL unlikely to approve more than two teams in the L.A. market (not to mention the L.A. market not likely to support more than two teams at a level sufficient to pay off two stadiums), there’s a bit of a land rush going on now to be the first to stake a claim to the market just so no one else does. Spanos, in particular, really doesn’t want two teams that aren’t his on his Southern California doorstep, so this serves as a bit of a shot across Kroenke’s bow: We’re going to build a stadium but split the price, and we don’t have a stadium offer back home like you do, and do you really want to gamble that the league will approve your plan over ours?

That’s not the worst thing for California taxpayers, frankly, since it means the three owners are so busy trying to outmaneuver each other that they can’t spend as much time and energy trying to exact tribute from local governments. (Chargers and Raiders execs claim that the Carson stadium wouldn’t require any public funds, but we’ve heard that before.) Though the prospect of Spanos and Davis using this as leverage in San Diego and Oakland could be bad news for taxpayers there, of course.

We may know slightly more once the two teams and their Carson development partners hold a press conference this afternoon. (Friday afternoon, the traditional time for dumping news that you don’t want fact-checked too thoroughly: Add that to your conspiracy bucket.) In the meantime, just enjoy the fact that one side of the stadium would apparently look like a giant, translucent, luxury-box-filled shuttlecraft: 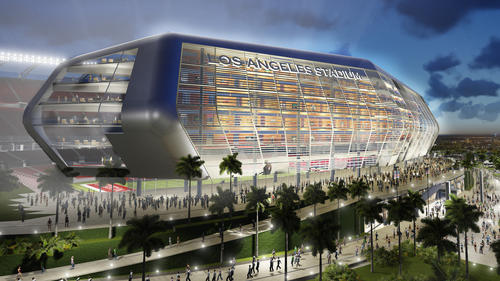 Ah, vaportecture, where would we be without you?

55 comments on “Chargers, Raiders team up for $1.7B Carson stadium announcement (actual stadium not necessarily included)”