With the San Francisco 49ers getting a new stadium in Santa Clara, their old home of Candlestick Park will be imploded as soon as the 2013 NFL season is concluded, the San Francisco Chronicle reported earlier this week. The site is currently set to become a multiuse mall-plus-housing complex, though developer Lennar Corp. hasn’t actually set a date for when it’ll build that.

Interestingly, the Chronicle adds, “There are also plans for a 3,000- to 4,000-seat arena that could accommodate small concerts, house the San Francisco Bulls ice hockey team and maybe even host pro women’s basketball.” That seems more speculative than anything — the Candlestick site is even harder to get to than the Bulls’ current home at the Cow Palace, and the WNBA hasn’t expanded in eons. Worth keeping an eye on, though.

In the meantime, the imminent demise of the Stick doesn’t seem to be causing too much grief among Bay Area fans — the best the Chronicle could come up with to say about the stadium is that “it hosted two World Series, The Catch and the Beatles‘ last concert,” which had me confused until I realized they meant this The Catch and not this one. Candlestick was by all accounts a decent (if hard-to-reach and windy) baseball stadium until it got closed in by additions for the 49ers in 1971, after which it was a not-that-satisfying hybrid of a baseball and football stadium. I’ll mostly remember it for the completely excellent buttons that the Giants gave out in the mid-’80s to fans who stayed till the end of an extra-inning game: 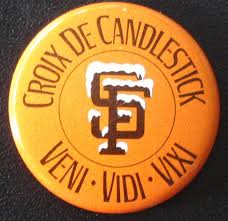 I tried for one in 1983 or so, but sadly the game didn’t go extra innings. Though given the usual translation of “vixi,” maybe it’s just as well.