The Mecklenburg County commission voted 5-3 on Wednesday to hand over the site of 83-year-old Memorial Stadium to the city of Charlotte for a new soccer stadium for a potential MLS team — but no money for building it, which is what the ownership group had been hoping for. Commissioners said they wanted to see a soccer stadium built, but, you know, by the city, not them:

“They manage stadiums and they have a division in the city that deals with pro sports teams,” [Commissioner Jim] Puckett said. “They have a dedicated tax revenue stream that’s for entertainment and can be used for pro sports. They have the expertise and funding stream to deal with that.”

The team’s original plan was for a $175 million stadium where $101.25 million of the costs would be paid off by the county, with the team repaying the public via $4.25 million a year in rent payments. (Note to readers who can do math: No, $4.25 million a year is not enough to repay $101.25 million in bonds unless you get a 1.5% interest rate, which I know they’re low but get serious.) Now they’ll instead have to try to hit up the city of Charlotte alone, which has already indicated that its maximum contribution is $30 million.

That would leave the team to shoulder $145 million of the cost, plus MLS’s nutso $150 million expansion fee, which is a hefty chunk of change. On the other hand, the team wouldn’t have to make those rent payments, so maybe it could just go to a bank and borrow the cash, and make mortgage payments instead? Or maybe the rich NASCAR track heir who wants to launch the MLS team would rather have somebody else on the hook for loan payments if his team, or MLS as a whole, went belly-up at some point as a result of its pyramid-scam spree of handing out expansion franchises like candy to anyone who wants to pay $150 million for candy? Yeah, probably that.

If you’re keeping score, the MLS expansion candidates are now:

That’s a whole mishmash of stuff indeed, and I don’t envy the job of the MLS officials tasked with having to pick two winners this fall (and two more next fall, because they can’t cash those $150 million expansion-fee checks fast enough). You have to wonder if commissioner Don Garber doesn’t think to himself sometimes, maybe it’d be easier just to stick the expansion franchises on eBay and take the highest bids. It would mean giving up on the pretense that they’re actually selecting the best soccer cities or something, but get real, nobody believes that anyway.

These are mostly terrible ideas, notes the Guardian, at least where they involve public money. And if the newspaper slightly overstates the case that there’s growing pushback on MLS subsidies (truth is, they’ve never been an especially easy sell as sports subsidies go, mostly because MLS isn’t as popular yet as the Big Four sports), it does contain a classic defense of them from Peter Wilt, the Chicago Fire founder who now heads later headed the Indy Eleven NASL team and wannabe expansion franchise:

“It is about image and plays into making a city cool to live in, a good experience for young professionals, and reducing the brain drain on a community. Things like that are sometimes not taken into account. If Oakland loses the A’s and the Raiders, which is a possibility, then no one will hear about Oakland in any positive terms for the foreseeable future.”

Things like that actually are taken into account in economic studies of teams and stadiums, which overwhelmingly find that if sports teams make cities “cool,” it doesn’t show up in things like per-capita income or jobs or economic activity or tax receipts. Plus you’d then have to explain how a city like Portland, for example, which until recently had only basketball as a major-league sport and famously turned down a domed stadium in the 1960s that would have brought an NFL team, nonetheless became one of the hippest cities in America. (It has MLS now, but the hipness predated that.)

Anyway, with MLS set to announce four more expansion franchises in the next year or so, the league can probably count on some cities stepping up to throw money at new stadiums, so long as they’re not too picky about which ones. (Cincinnati, Raleigh/Durham, Sacramento, and San Antonio are also in the mix.) Bulk-mailing extortion notes is kind of a strange business model, but hey, whatever works.

Major League Soccer is preparing to announce another round of expansion — this time to a whopping 28 teams — and is clearly determined to grab all the money it can in the process, as deputy commissioner Mark Abbott says the league is preparing to double its expansion fee to $200 million.

That’s a whole bunch of money for membership in a league whose own commissioner says it’s losing money, and which Soccernomics author Stefan Szymanski has called a “pyramid scheme” that’s eventually going to collapse. Given that the leading counterargument appears to be that “no, no, even if teams always lose money owners will count on making money when the sale value of the franchise appreciates,” it’s exactly a pyramid scheme — the only question is whether it’s the kind of bubble that eventually collapses, or one that can continue indefinitely.

The argument for the latter — and, presumably, the MLS business plan — goes back to the billionaire glut, which posits that there are so many rich people wanting to own a pro sports franchise these days, and such a limited number of opportunities, it’s going to be a seller’s market for the foreseeable future. With that the case, it’s understandable that MLS would want to get everything it can for new franchises while the getting’s good, even if it means becoming by far the largest soccer league in the world. (Most other leagues cap membership at 20 and relegate the teams that do the worst to a second division, something that MLS has resisted because it might limit the number of people lining up to sign expansion checks.) And with a list of prospective expansion cities that includes way more than they can possibly fill in this round — Sacramento, Detroit, Cincinnati, San Diego, St. Louis, San Antonio, Charlotte and Oklahoma City are all reportedly on the list — it makes total sense to weed out the winners from the losers by seeing who’ll balk at a higher price tag.

Clearly this isn’t sustainable in the long run, but MLS isn’t thinking about the long run right now, which is its prerogative. If you’re a city thinking about building a stadium for a new MLS franchise, though, you might want to at least keep in the back of your mind that there’s a decent chance the league could, years down the road, eventually contract again — or at least split into upper and lower divisions — and that your shiny new team could end up without a chair when the music stops.

The San Antonio city council and Bexar County agreed yesterday on a deal to buy the city’s minor-league soccer stadium and lease it back to a new minor-league team to be owned by the Spurs NBA team so that eventually it can seek an MLS franchise and — you know what, this would probably be easier in bullet points:

On the face of it, this looks like a horrible deal for the city and county: In exchange for $18 million in cash, the public gets a pittance in rent (a little over $1 million total in present value), plus the possibility of maybe $3-4 million more in present value from the penalty clause. (Presumably the stadium will be exempt from property tax as well, though since it was owned by a nonprofit it didn’t pay any before, either.) If MLS does come, it gets even worse, since suddenly taxpayers would be on the hook as well for upgrades to expand the stadium to MLS capacity, which could easily amount to $100 million or more.

I guess you could argue that this is the price San Antonio needs to pay to get a chance at an MLS team — except that it’s way, way more than the price being paid by Orlando and probably Minnesota and a whole bunch of other MLS expansion cities, so what up, San Antonio?

Sacramento Republic FC has chosen a designer for a new soccer stadium if it makes it to MLS (not that it doesn’t already have design renderings — hope you know how to design magical purple glowing radio towers, HNTB!), and the mayor of San Antonio is looking to help bring an MLS team to an expanded stadium in her city even as the local NASL owner is selling his franchise, and some developers in Las Vegas want to convert the 51’s minor-league baseball stadium for an MLS team, and…

…you know what? I’m going to go watch some baseball at the place with the free tickets. If there’s any important stadium news the rest of this week I’ll check in. If it’s just more MLS expansion teams, it can wait till next week. If MLS pre-announcing that they only had one expansion team left was supposed to work up a frenzy of cities bidding to land that slot, man, is it ever working. The latest is San Antonio, where the minor-league Scorpions appear to have convinced the city council to kick in toward expanding their stadium from 9,000 to 19,000 seats in order to be MLS-ready. From the Scorpions’ press release:

The cost to expand Toyota Field is estimated at $38-45 million.  Designed by Pro Sports Developments (PSD) of San Antonio, the expansion envisions the addition of 10,000 seats to the existing 8,000, with 9,000 of the new seats on a new upper tier that would create a bowl-like configuration around the playing field…

Eighteen suites accommodating up to 24 fans apiece would be added to the east side of the stadium, bringing the total number of Toyota Field suites to 32.  Plans also call for three new clubs – the East Club with 130 balcony seats on the east suite level, the West Club with 40 observation-terrace seats on the existing west suite level and a Members Club at the southeast corner of the stadium.  Club patrons and suite holders would be allowed to use a new entrance directly across from existing reserved parking.

Other proposed enhancements include concessions, restrooms and merchandise outlets on each stadium level to efficiently meet the level of fan demand at halftime; field lighting for Division 1 network broadcasting; and a team store accessible from inside and outside the stadium.

All that for $45 million seems … ambitious, let’s call it? If they can pull it off, it’s not a huge expense as these things go. But it looks like the Scorpions owners would still be asking San Antonio taxpayers to chip in an unknown amount: Five city councilmembers have pledged to pass a resolution saying they’ll “assist” in luring an MLS team, whatever that’s supposed to mean.

Also unclear is whether the expansion plans would only be approved contingent on San Antonio actually getting an MLS team, which you sure hope would be the case, but you never know. In the meantime: pretty pictures! 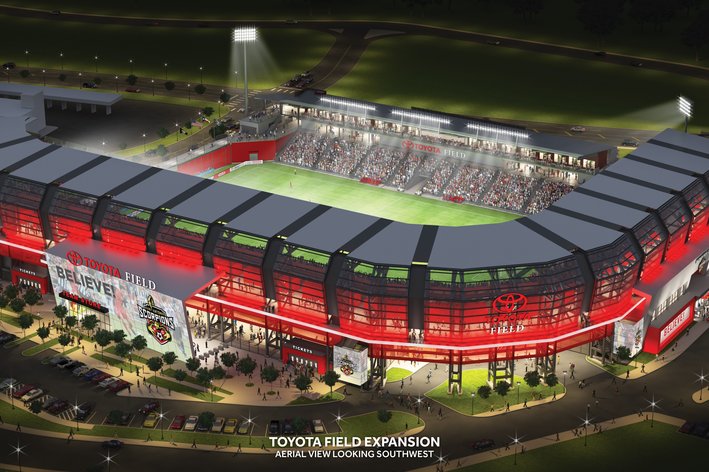