If the symbiotic relationship between the Buffalo Bills owners seeking public cash and the Buffalo News seeking an exclusive wasn’t enough to squick you out, the Arizona Republic yesterday released its own “exclusive” look at Arizona Coyotes owner Alex Meruelo’s arena plan for Tempe, subscribe to the paper now to find out what’s in it!

Or read below for the most important bits:

The Arizona Coyotes are proposing a $1.7 billion development in Tempe with a hockey arena, hotels, apartments and shops that the team says would be financed by private investors

The sales-tax kickback is part of a Community Facilities District, aka a TIF (Good Jobs First has an excellent new explainer page up on TIFs, btw), wherein Tempe would sell $200 million in bonds and repay them via a combination of:

In addition, since the land for the arena needs environmental cleanup, Meruelo is offering to pay $48 million toward remediating the site as a purchase price, but no actual cash to the city. Coyotes President and CEO Xavier Gutierrez says this is a fair deal because the land is worth less than that; it’s 46 acres, and most vacant land in Tempe seems to be going for more than a million dollars an acre, so that’s maybe not entirely accurate, but barring an actual assessment of the land — or putting it up to bid — it’s hard to say for sure.

How much the total subsidy would be will depend on how much that property tax abatement amounts to, and how much of a land discount Meruelo would be getting. It’s definitely more than $200 million, though, which sounds pretty good in the context of a $1.7 billion project, but maybe less so if it’s compared to an arena price of, say, $400-500 million. (That’s just a guess; Meruelo and Gutierrez didn’t break down project spending for the Republic.) Is Meruelo actually contractually promising to building all the other stuff like two hotels and a theater and apartments and detail he says he plans to build nearby, or just saying he plans to, hopefully?

“He is fully committed to do so, and he has the financial wherewithal to be responsible for that,” Gutierrez said.

That’d be a “check the fine print, first,” then.

Clearly the idea here is to spin a bunch of special tax breaks as not really tax breaks at all — Gutierrez told the Republic, “We’re on the hook for all of this. It really is going to be something that has no financial liability for the taxpayers or the residents, and we’re willing to really embrace that risk.” That doesn’t seem to be true at all, so now the only thing we need explained is “How much money, exactly, would Tempe be putting up for a hockey arena?”, which at present is unknowable.

There are also (nonpaywalled) a bunch of renderings of vaguely glowy buildings and underlit people, if that’s more what you’re in the mood for today. Also, whatever the hell is going on here: 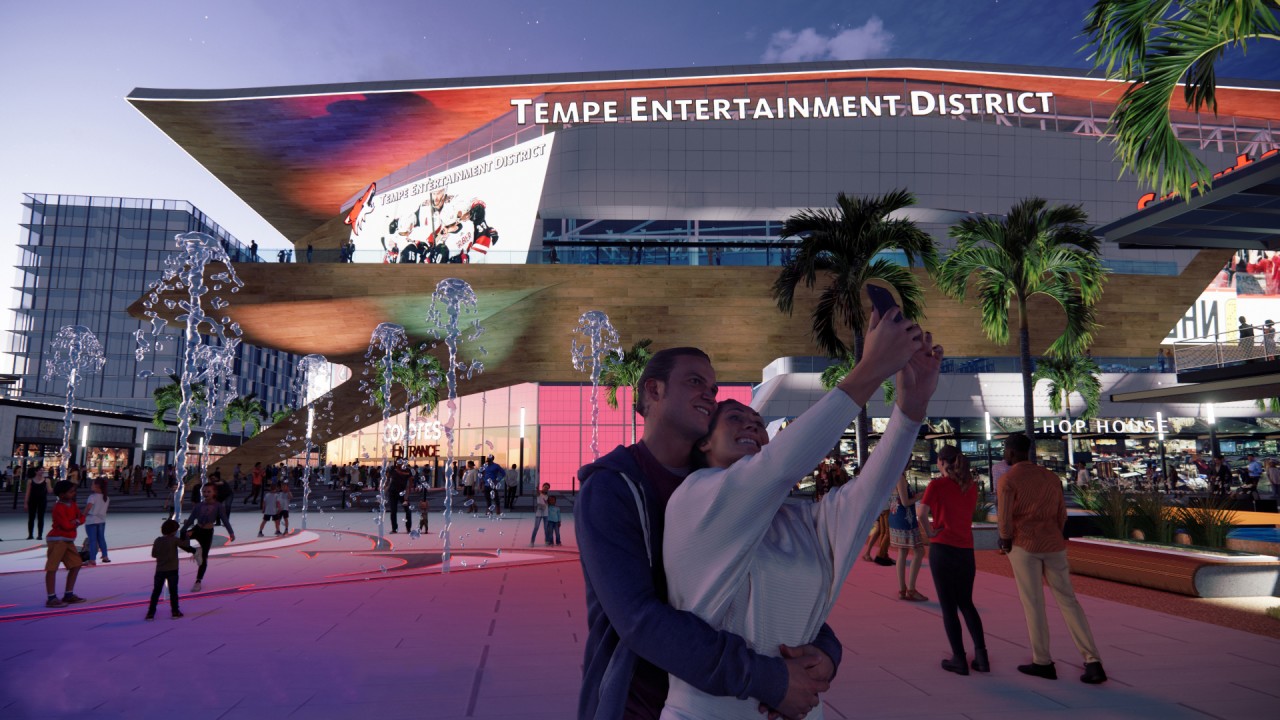 I guess they’re taking a selfie, with the sidewalk as a backdrop? And the palm tree in the background has curled its fronds in such a way that its photobomb doesn’t obscure the outline of the phone? Okay, maybe we actually have several things we need explained.